The most peculiar features of this model are the triangular ultracompact shape and the minimum space occupied on the ground (25 meters x 25 meters only, 10 meters height at rails level, with 200 meters track).

The triangular shape gives the opportunity to occupy a space just in a corner of the park; this space isn’t usually taken, because the majority of rides is of circular shape and the corners remain unutilized.
In that way, the cost of the stallage to be corresponded to the owner of the site is reduced and also when the owner of the site is the purchaser, this coaster takes an operating space so narrow (little more than 300 meters) than space enough for other rides is left.

We wish to point out that WILD WIND is a thrilling coaster for young people, where the track begins with a sharp 90° curve, accelerating down towards the inversion with an acceleration of about 4 gravitational acceleration (it means 4 times the increase of one’s own weight) with an inverted exit point.

The ride continues over a hill into a generous threefold loop, continually accelerating in the lowest curve, then travels upwards again in the last curve over a hill before the rides brakes before the station. All happens in one minute of emotions.

ATTENTION: in the one train version, it’s possible to programme two rounds of the train, before it automatically stops.
There are two different versions of this model: the first is a permanent, but portable one; this means that there is no need of concrete foundations and no restraint (fastening to the ground) is needed, because the attraction is provided with its own self contained base, which is leant (not fastened) on the ground, so that the ride can be dismantled and set up in another place at one’s will.

In fact, in two days only WILD WIND can be dismantled and in three, four days you can set it up and make it operate in the new place.

Moreover, Interpark produces a WILD WIND expressly manufactured for the travelling showmen (effecting more than 10 displacements every year), with the station on semitrailer, where it’s no more necessary to load and unload trains, electric board, pneumatic board, compressor, lights, because everything’s fixed on the trailer of the station, which can be easily moved and load the rest of the structure together with three more semitrailers, two days only for the setup and one day for the dismantling, and the coaster is transferred to another place. 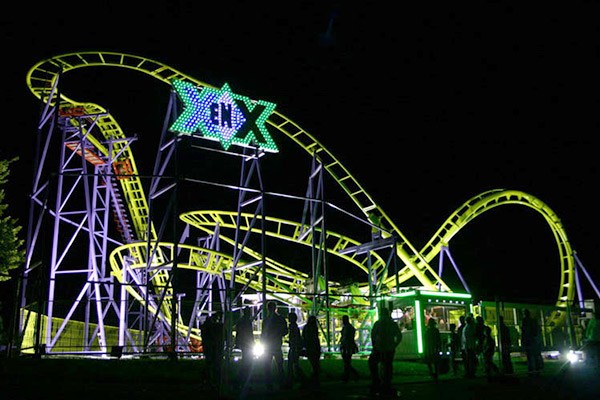